To help ease food supply concerns in its host communities and neighboring barangays amidst disruptions brought about by the COVID-19 crisis, JG Summit Petrochemicals Group (JGSPG) distributed food aid to various local government units across Batangas City, as well as in the Municipalities of Bauan, San Pascual, and San Jose in Batangas province. 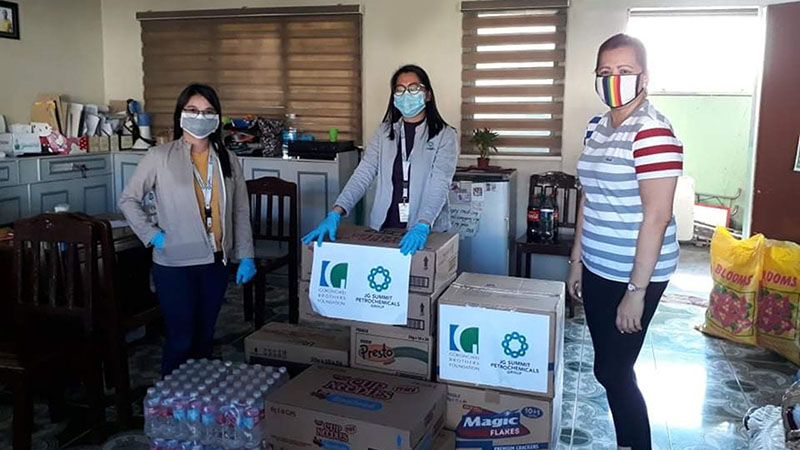 JGSPG, whose petrochemical manufacturing complex is located in Batangas City, tapped into the Php100 million fund earmarked by the Gokongwei Brothers Foundation (GBF) to send much needed food items to a total of 70 barangays across the four Batangas LGUs. GBF, in announcing the fund at the onset of the quarantine, identified two target key beneficiaries: frontline health providers serving in national and local public hospitals, and the communities where the group’s various business units operate.

JGSPG’s Government Affairs Team immediately organized the aid effort through coordination with GBF. Over the course of three weeks during the quarantine, two tranches of food aid were distributed. 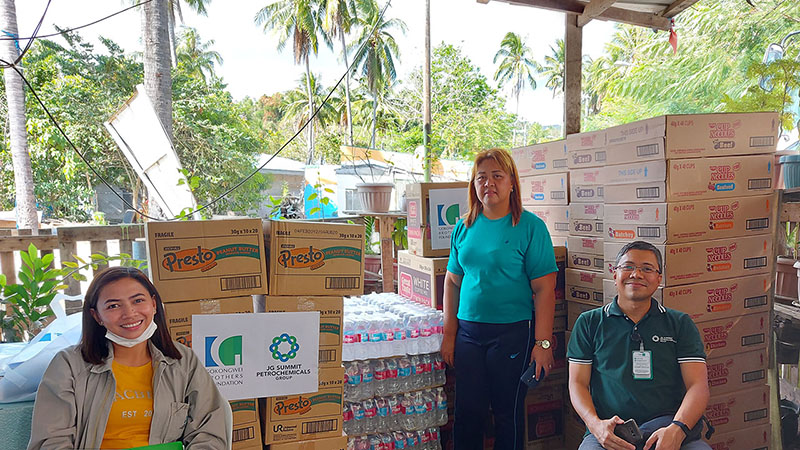 JGSPG staff at Barangay Simlong, one of the host communities of the company.

Recipient communities were residents of JGSPG’s three host barangays, Simlong, Pinamucan Ibaba, and Pinamucan Proper; two other adjacent communities, Pinamucan Silangan and Malibayo; other communities that make up the Solid Baybay Barangay Cluster; and residents in the towns of Bauan, San Pascual, and San Jose. Personnel from the Bureau of Fire Protection and the Philippine National Police in Batangas City, themselves frontliners in the battle against COVID-19, also received food aid. 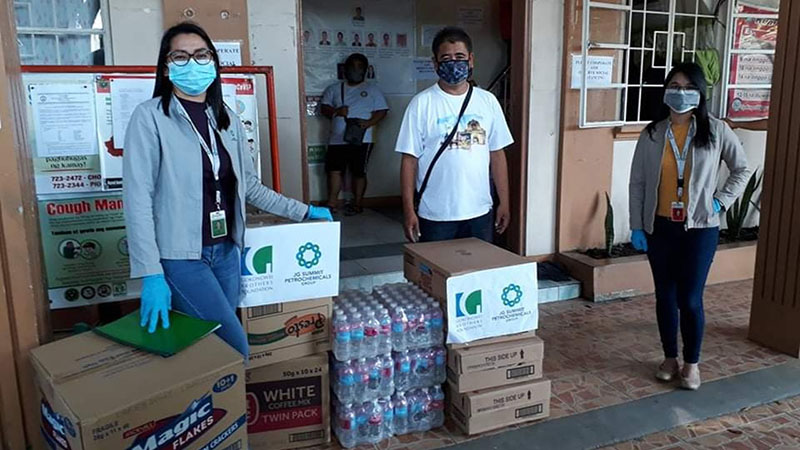 In his letter of thanks, Chairman Fetalvero conveyed his heartfelt gratitude for JGSPG’s “kindness and compassion to the plight of Batangueños in these trying times,” and added that the aid was a big help to their constituents. Messages of appreciation were also posted on social media by Chairmen Bien Mercado of Barangay 21 and Deo Aquino of Barangay 17, whose units are part of the Poblacion Cluster. 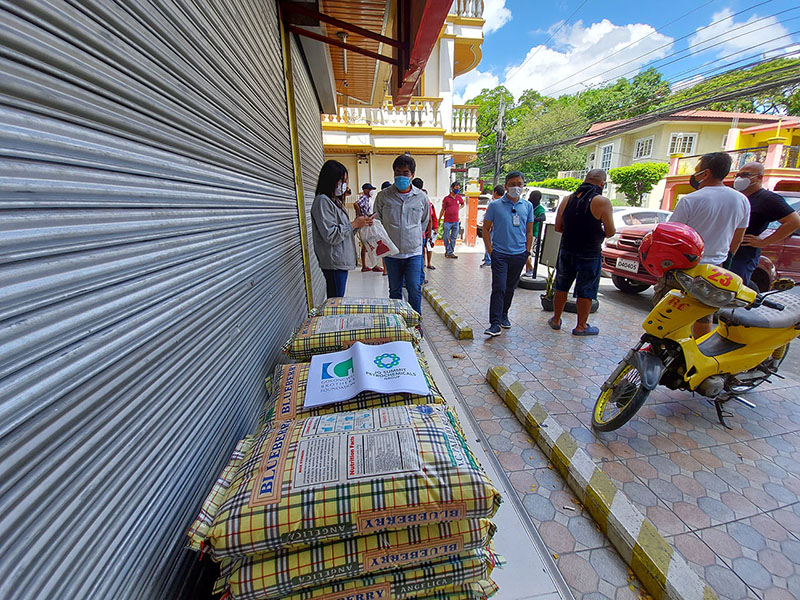 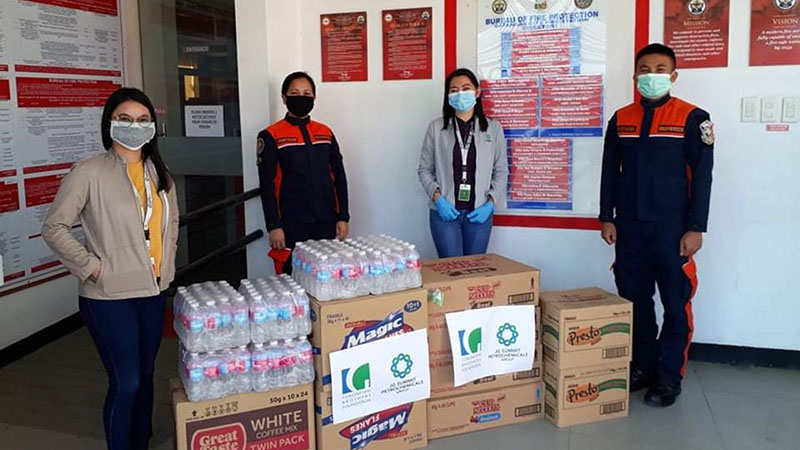 The Bureau of Fire Protection in Batangas City was also a recipient of the food aid. 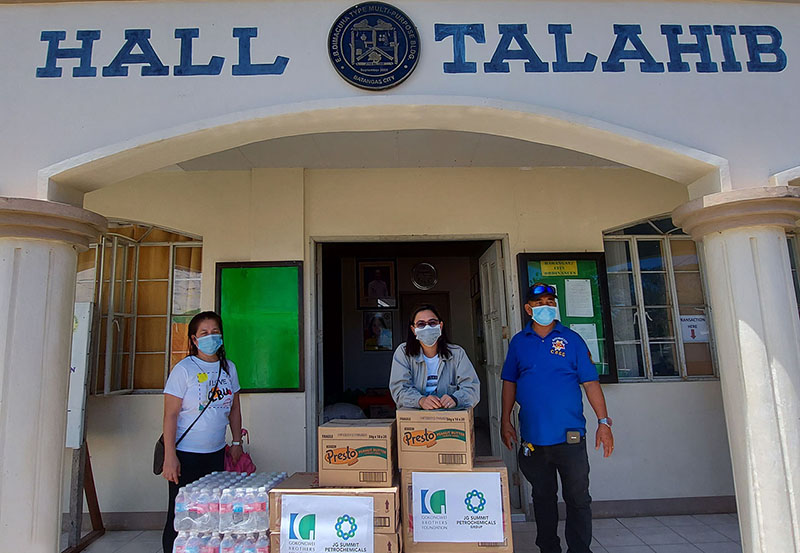 Donations delivered to the town hall of Barangay Talahib Pandayan.

In partnership with GBF, JGSPG was able to reach out once again to its host and neighboring barangays, and other local government partners, helping stakeholder communities cope through provision of immediate food aid at a time of great need.

Despite the logistical challenges, a deep sense of satisfaction pervaded the team that led the distribution efforts. JGSPG’s Community Relations Officer Arnel Paclibon described being an instrument in alleviating the burden of neighbors in this time of crisis as “one of my proudest moments as part of the JG Summit Petrochem family.” And for Public Relations & Security Affairs Officer Rey Nelson Amparo, there could be no better work than being of service to others.

Both Arnel and Rey, together with the rest of the team, were particularly proud that JGSPG, in partnership with GBF, once again stood up and lent a helping hand to neighboring communities in need.

Original story can be found on https://www.jgsummit.com.ph/impact/gbf-and-jgspg-extend-food-aid-to-batangas-communities-20200417-lfrm?ref=home_hero_1