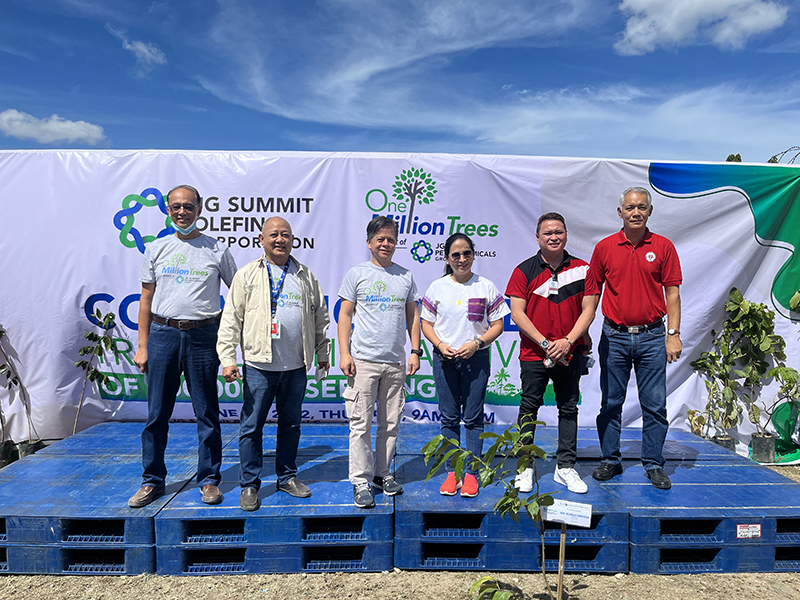 Just in time for the celebration of Philippine Environment Month in June and coinciding with Philippine Arbor Day last June 25, 2022, JG Summit Olefins Corporation (JGSOC) commemorated an important milestone on its One Million Trees Project after it reached the halfway mark.

Select JGSOC executives and employees were also present during the commemorative tree planting as they also planted an additional fifty-four banaba, mulawin and balayong tree seedlings in various selected areas inside the complex.

The local government thanked JGSOC for its strong commitment of pursuing this project especially in Batangas province as well as other select beneficiaries of the program.

To date, 88% of the tree seedlings that were donated and planted were in various localities in Batangas province while 12% of the seedlings were given to various government agencies, civic groups, schools and employee volunteers including the planting of seedlings in Boracay Wetland No.8 in Malay, Aklan, which up until recently was adopted by JGSOC as part of its sustainability activities.

The One Million Trees Project of the JGSOC was launched in 2016, which targets the planting of one million indigenous and fruit-bearing tree seedlings in Batangas province, the host province of JGSOC’s petrochemical business, and in other areas where regreening and forest rehabilitation projects are needed.

JGSOC maintains a tree nursery in its manufacturing complex, from which the donated seedlings are nurtured prior to distribution. Under the project, a comprehensive tree parenting initiative is implemented where aside from growing the seedlings, the seedlings that were donated and planted are also monitored on its growth to ensure that they are cared for and are able to reach their full potential.

Some of the seedlings that were donated and planted since the start of this project include forest trees such as narra, molave, caballero and banaba and fruit-bearing trees such as cacao, dalanghita, rambutan, mango, kalamansi, lemon and guyabano.

JGSOC maintained that it will continue to pursue this project given the importance of protecting and improving the environment for the benefit of future generations. The company also said that it will pursue collaborating and partnering with like-minded groups to ensure the goal of this project of planting one million trees all over the Philippines is attained.