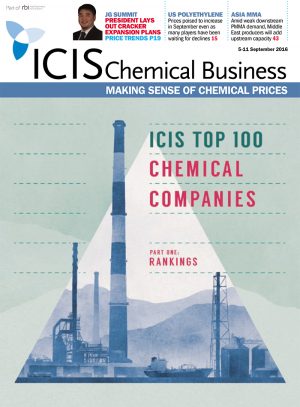 Company president Patrick Go sees petrochemicals in the sweet spot, and says the time is ripe for a major expansion

JG Summit Petrochemicals Group, the sole cracker operator in the Philippines, is pursuing a $500m-$600m expansion over the next three years as it is bullish on the domestic growth prospects of the industry, the group’s top executive told ICIS.

“We think [the] petrochemicals [industry] is in a sweet spot right now because of the price of crude and naphtha and we think the derivative market will be stable,” said Patrick Go, president and chief operating officer of JG Summit Petrochemical Corp and JG Summit Olefins Corp.

“We’re taking a long-term view that it will stay like this for the long term, so we decided to invest – expand the cracker while the opportunity is there,” he said.

The company has an integrated petrochemical complex located in Batangas, 120 kilometers south of Manila.

“For the expansion, it’s $500m-600m because it will involve other derivatives,” Go said.

“Basically, we are investing in a new polymer plant, expanding our polypropylene plant. We’re also investing in BTX [benzene, toluene, xylene] extraction and BD [butadiene] extraction,” he said. The expansion project will take three to three-and-a-half years to complete, he said.

“We have already signed up technology agreements for most of the projects. The only open one is for polyethylene. So we still have to make a decision on the technology to invest in. But other than that, the BTX, BD the expansion, all these are going through basic front-end engineering,” Go said.

It will be using the process technologies of Lummus/BASF for butadiene (BD) extraction and of GTC Technology for benzene-toluene-xylene (BTX) extraction.

The cracker currently yields about 280,000 tonnes/year of pyrolysis gasoline (pygas); and between 110,000-120,000 tonnes/year of mixed C4, from which BTX and BD can be extracted, respectively. “Right now, we sell [pygas and mixed C4] as a full stream. After the expansion, we will be extracting the components,” Go said.

For the PE plant, about 30-40% of its output will be sold within the domestic Philippines market, while the rest will be shipped out, he said.

For this year, the group is targeting a revenue growth of 10-15%, and possibly 20% in 2017, backed by high utilization rates at its plants; Go said.

“Most of this will come from operational efficiencies. We were running at much lower rates in 2015,” Go said.

According to the JG Summit Holdings, its petrochemical operations posted a 6.8% year-on-year increase in first half 2016 gross revenues to Philippine pesos (Ps) 13.0bn, with net income surging to Ps2.43bn from Ps490.4bn in the previous corresponding period.

For the full year 2016, the petrochemical plants should be able to post an average operating rate of 80-85% taking into account production hiccups throughout the year, although the company tries to run the plants at 98-99%, according to Go.

“Right now, when we are doing is we are filling a gap – there’s no petrochemical supply in the Philippines to begin with. That’s why the rate of growth for us was big – we are able to run at high operating rates right away,” Go said.

The cracker started commercial operations in November 2014, when crude prices had been spiraling downwards on oversupply concerns, pulling down naphtha prices. The slump in crude and naphtha prices in recent years has had a net positive effect on the company operations, he said.

“Nobody saw that coming, so when it happened, we might as well make advantage of it. It lowered our working capital requirements, it made products more affordable. We think demand will stay healthy, so overall we see it as a positive,” Go said.