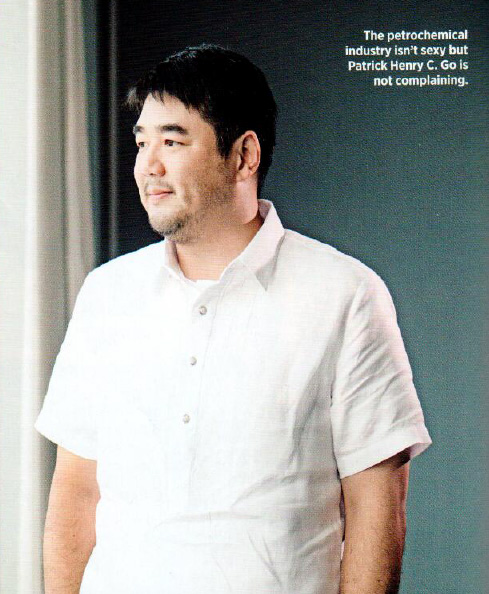 The country’s first naphtha cracker took 20 years to plan and build, its journey marked by global crises and domestic slumps. Now comes the hard part of turning a profit amid a liberal trade regime and local government bans against plastic bags.

A cargo of naphtha, a colorless liquid mixture of hydrocarbons, was coming in from India on February 12, 2014. Patrick Henry C. Go, executive vice president of the JG Summit Petrochemical group, was among those waiting at the jetty.

It was crucial moment for the petroleum company. For almost 20 years, JG Summit’s bid to invest in the country’s first naptha cracker had been on the drawing board.

Gleaming steel pillars overlooking Batangas Bay now stand ready to take colorless feedstock, serving as markers to the JG Summit group’s faith in the Philippine manufacturing, whose role in the economy has declined markedly since the 1970s.

Through those years,John Gokongwei Jr., chairman emeritus of JG Summit holdings,staunchly held on to his vision that local manufacturing must have it’s own petrochemical base to boost self-reliance.

The cracker’s journey into being was marked by the world’s financial crisis. On the drawing board since 1994, it was first delayed by the 1997 Asian currency crisis. Then when the JG Summit group was ready to try again in 2005-2006, it was hit again by the US mortgage crisis.

What saved the project was when Gokongwei – ”Mr.John” to family members and staff – decided the group would finance the project itself and proceed.

The project was conceived to be an integrated complex of polymer plants and a naphtha cracker. JG Summit Petrochemical Corporation (JGSPC) first invested $350 million (Php15.5 billion based on the average exchange rate last year) to build the polymer plants. Funding came from the Japan Bank for International Cooperation and Japan Bank Export-Import Bank.

Construction began in 1995 and was finished in 1998. The plants were shut down in 2012 to expand capacity and operations resumed in November last year.

JG Summit Olefins, the naphtha cracker company,was incorporated in July 2008. Engineering works for the cracker didn’t begin until late 2009 and commercial operations started only in November 2014.

The group thought it could delay the cracker and continue operating as a standalone polymer plant because margins were positive during the early years. From 1998 to 2005, the average gross income after cost of good sold was P187 million. Margins got tighter by 2003-2004 so that from 2006 to 2013,the average gross loss was Php94 million.

The global petrochemical industry was consolidating, but the group ”failed to see the writing on the wall,” explains Go, who is executive vice president of the two petrochem companies.

We thougt that the crackers would continue selling their products on their own, and there would be a constant supply of ethylene and propylene. But the South Korean crackers and most of the producers were integrating upstream and downstream. By 2005-2006, we were one of the three plants in the world that were not integrated with a cracker.”

By then, olefins were not readily available and were jacking up the the company’scost of goods. For several years, production costs were higher than revenues. Trading was controlled by a few. Smuggling of polymers also eroded profit.

“We had to make a decision. The convincing factor to proceed with the cracker was the polymer plant because $350 million was already put in. It was a choice between entering into joint ventures and doing it on our own. We finally decided to do it on our own in 2006-2007 just when the housing crisis hit in the U.S and the global markets.” He laughs at the uncanny way misfortune hit them twice.

Faced with such odds, most businessmen would probably abandoned or defered the project.Gokongwei did the opposite.

The shareholders’ decision to finance the cracker on their own was not easy, says Go. ”Well , $800 million is no joke,” he laughs. The project had to compete for resources with other businesses within the group as JG Summit was also investing heavily in telecommunications, airlines and shopping malls.

JG Summit is one of the country’s largest diversified conglomerates.